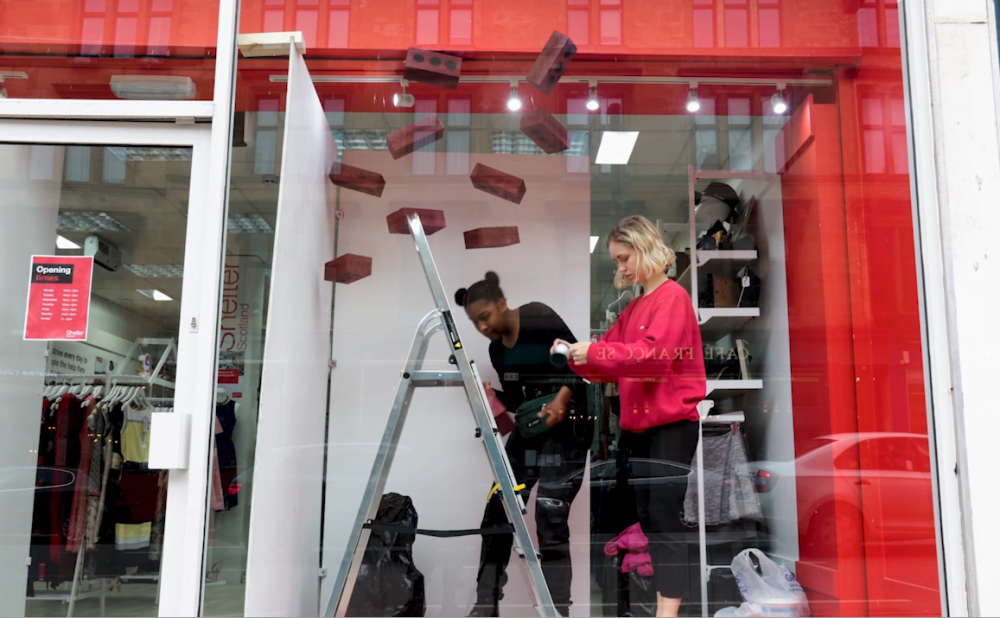 Two of our shop window displays are getting a makeover by young designers from The Glasgow School of Art (GSA) as part of a unique creative partnership to mark for our 50th anniversary.

3rd year Communication Design students Daisy MacDonald and Catriona Wastell have designed an art installation for our Nicholson Street shop in Edinburgh, which asks the question 'Where do you sleep?'. The piece depicts the choices of a nice cosy bed, a sofa, or outside on the street, which the two young designers say represents different facets of homelessness in 21st century Scotland.

Daisy and Catriona said: “By posing a simple and direct and bold question “Where do you sleep?” alongside three different environments our design concept seeks to raise questions for the public about their sleeping situation and what they/we all take for granted, the artwork also delivers key facts about the scale of hidden homelessness and concludes with a direct call to action for us all to unite and change the status quo.”

Chioma Ince and Georgia Dixon have designed an art installation for our Byres Road Boutique in Glasgow, which depicts a stairway of bricks emerging from a suitcase, which the two young designers say represents the progression from being homeless and living in temporary housing into finding a permanent home.

The students said: “Bricks can easily be understood as a metaphor for home and security. Our idea was to symbolize the progression from temporary housing, represented by a suitcase, to permanent homes, represented by the escalating bricks. The dynamic and theatrical nature of the display provides an eye-catching narrative and should intrigue the viewer offering Shelter Scotland an opportunity to start a conversation with potentially new supporters and volunteers.”

The installations – which will run for one week only – are part of a series of activities the GSA has undertaken to help Shelter Scotland mark its 50th anniversary. The GSA students have already unveiled the charity’s logo for its 50th and is also running a photography project which will result in a major exhibition later in the year.  They have also designed a striking and provocative poster which will be hung in the rest of the charity’s 37 shops across Scotland.

Professor Toms Inns, Director of The Glasgow School of Art:

“Working on this project has been an important opportunity for our students offering the chance to learn more about how to apply their creativity to a live brief.

“We hope that their thought provoking designs for Shelter Scotland’s shop windows will help to raise awareness of continuing issues around bad housing and homelessness, and be a call to action for people to support the charity’s important work in its 50th anniversary year.”

“This design is a thought-provoking representation of homelessness in its different forms and I congratulate the young designers on their concept and realisation.

“I encourage people in Edinburgh and visitors to the city to come along and view this excellent work. I thank the students and the GSA for their support in marking our 50th year.”

“This is our 50th year – but we’re not celebrating – we shouldn’t even exist. We’re still fighting until there’s a home for everyone in Scotland.”

Find out more & sign up to our 50th anniversary: shelterscotland.org/50.